I updated my PC setup and I'm working on a render setup within Blender to make realistic shots of my upcomming sculpting projects.
Soo I grabed my Orc bust and played around with Cycles. I would love to switch to Evee but the missing Global Illumination is still a thing ...  to create rally grounded renderings.
The render was in Full hd with CPU+ GPU and took me around a minute of render time which is a huge jump compared to my old system.
Now I'm reducing my idle times and can be more productive instead of waiting, looking outisde the window and cry :D :D

Anyways ... I like it so far but I will tweak it further until I'm happy with my setup.


Thanks for reading,
Cheers 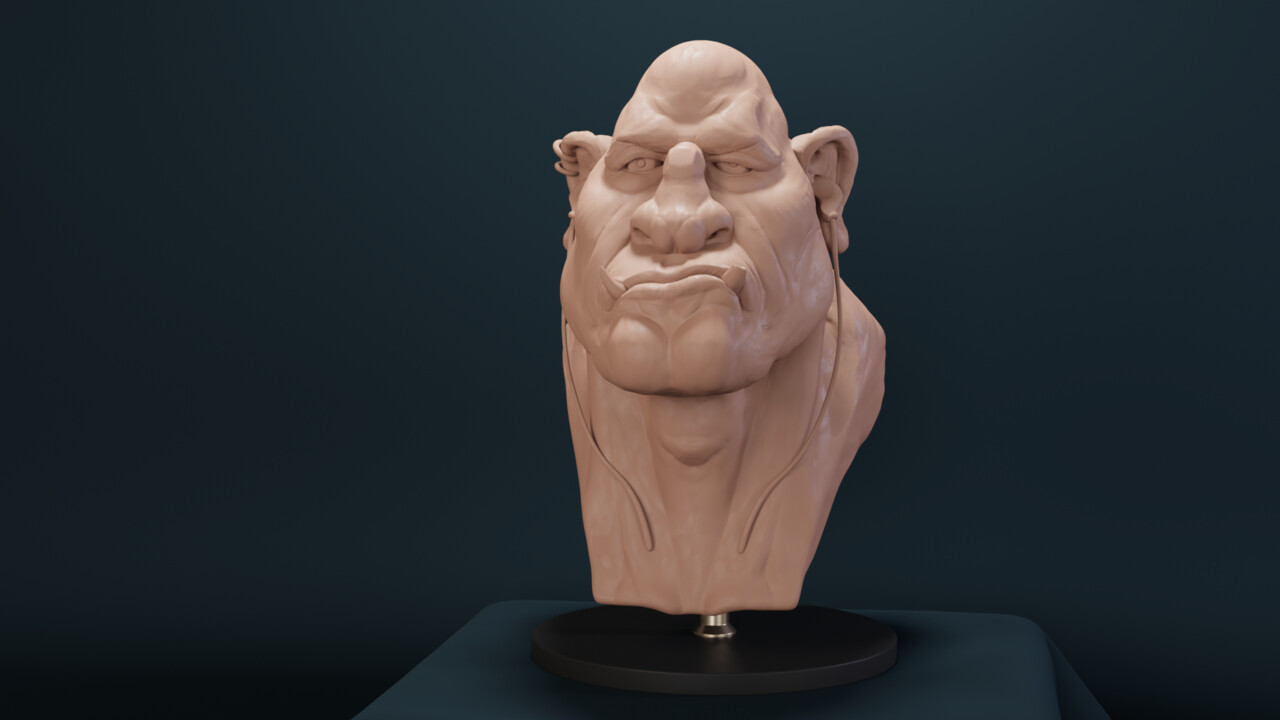 I textured the limbs and made a few more tweak of the overall values. For example I toned down the golden parts to fit better to the darker and warmer skin tone.  Also I tested the character inside the example paragon level. 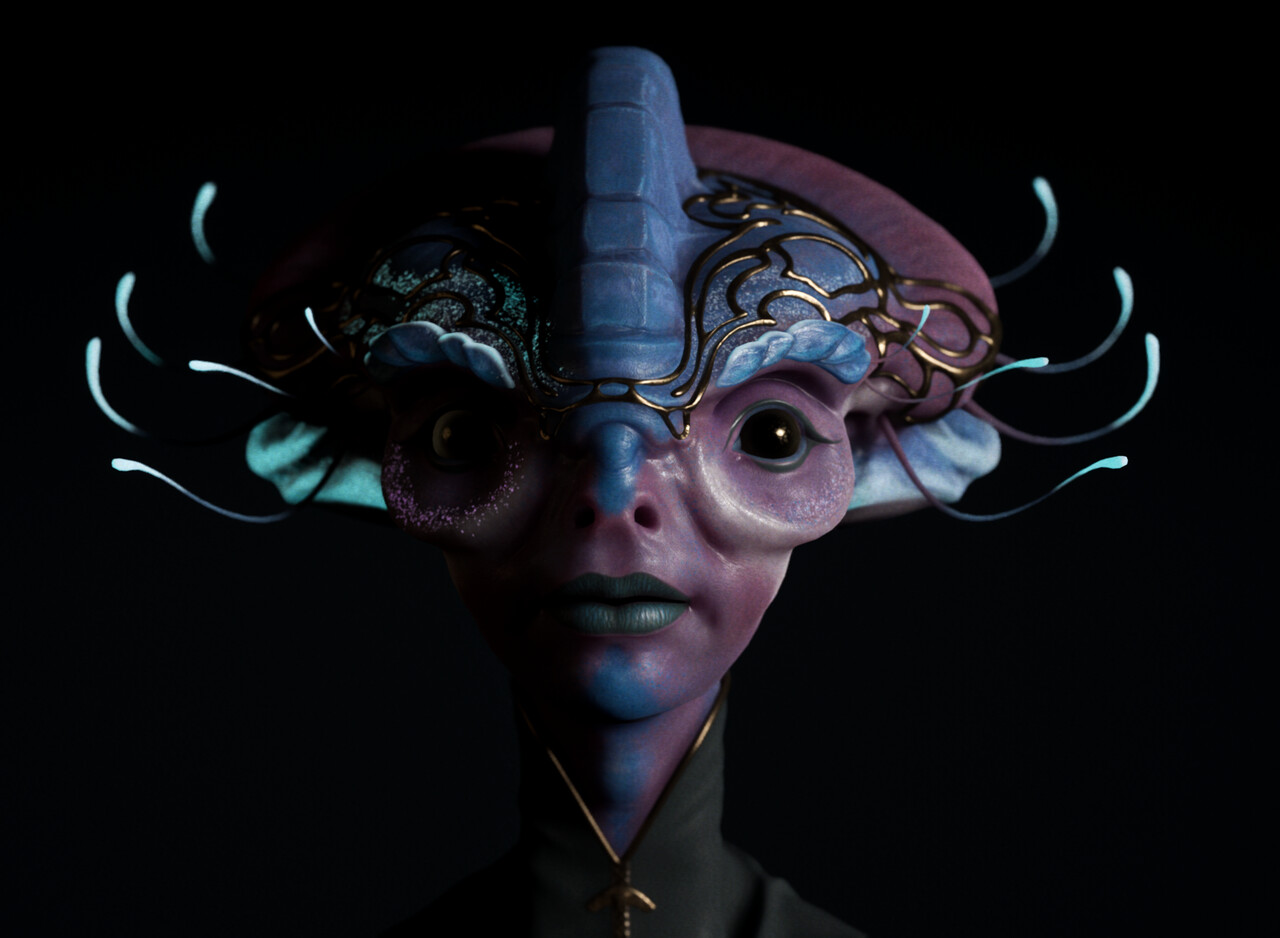 First impression inside the Paragon level 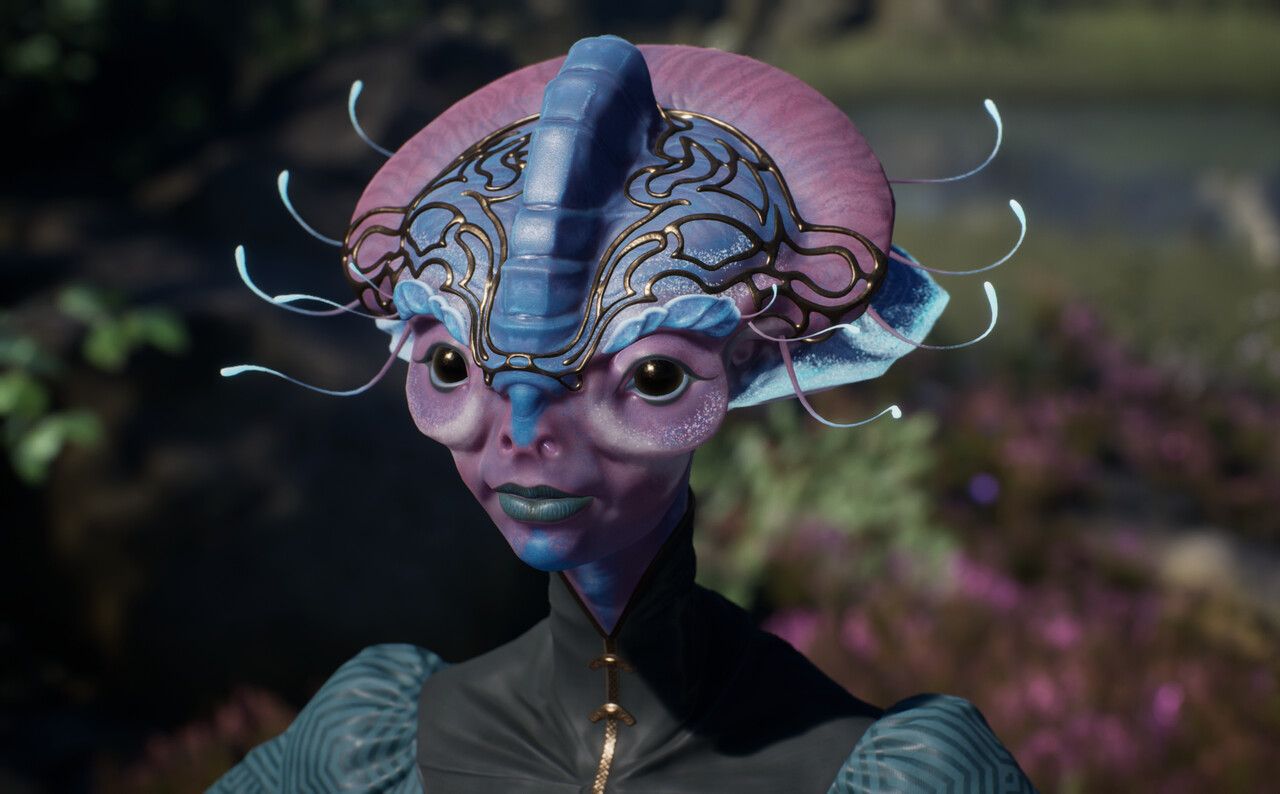 Today I started working on the skin, testing colours, bump details etc ..... my pc starts crying because of the amount of layers and folders ^^

Also I imported a new version into a fresh unreal project to test my texture values. I also used the eyes I made a few month ago but I'm not soo happy with the design, maybe I will jump back to eyes without any iris like a plane colour with a colour gradient or I will use a round iris and pupil instead.

Here are a few screengrabs from unreal  :) 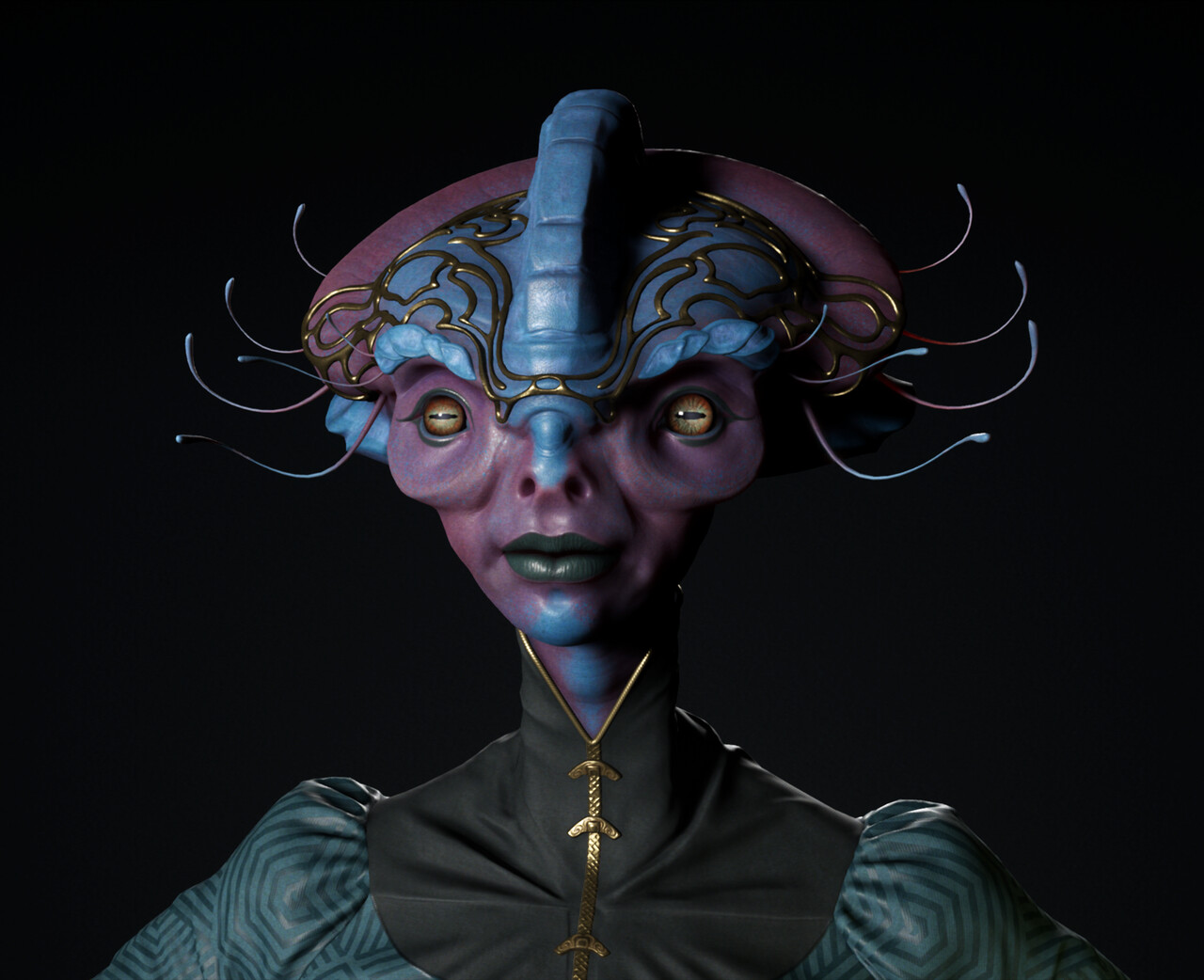 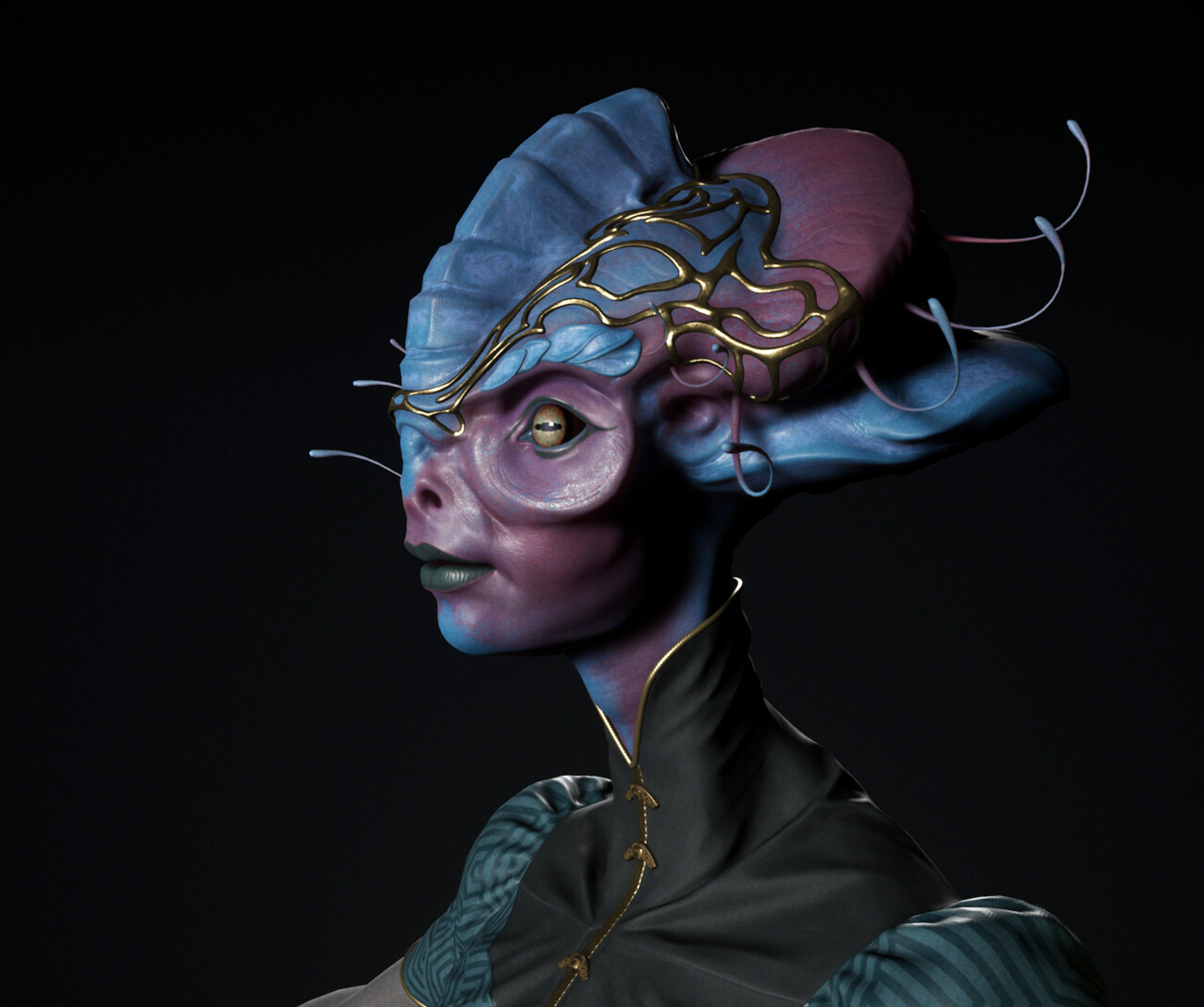 All bakes came out really smooth with just a tiny amount of corrections in really small areas. I started to layout the overall colour shemes and materials for the pieces and I'm very happy watching how every piece come together.

Here are a few images of the current status of her clothes. 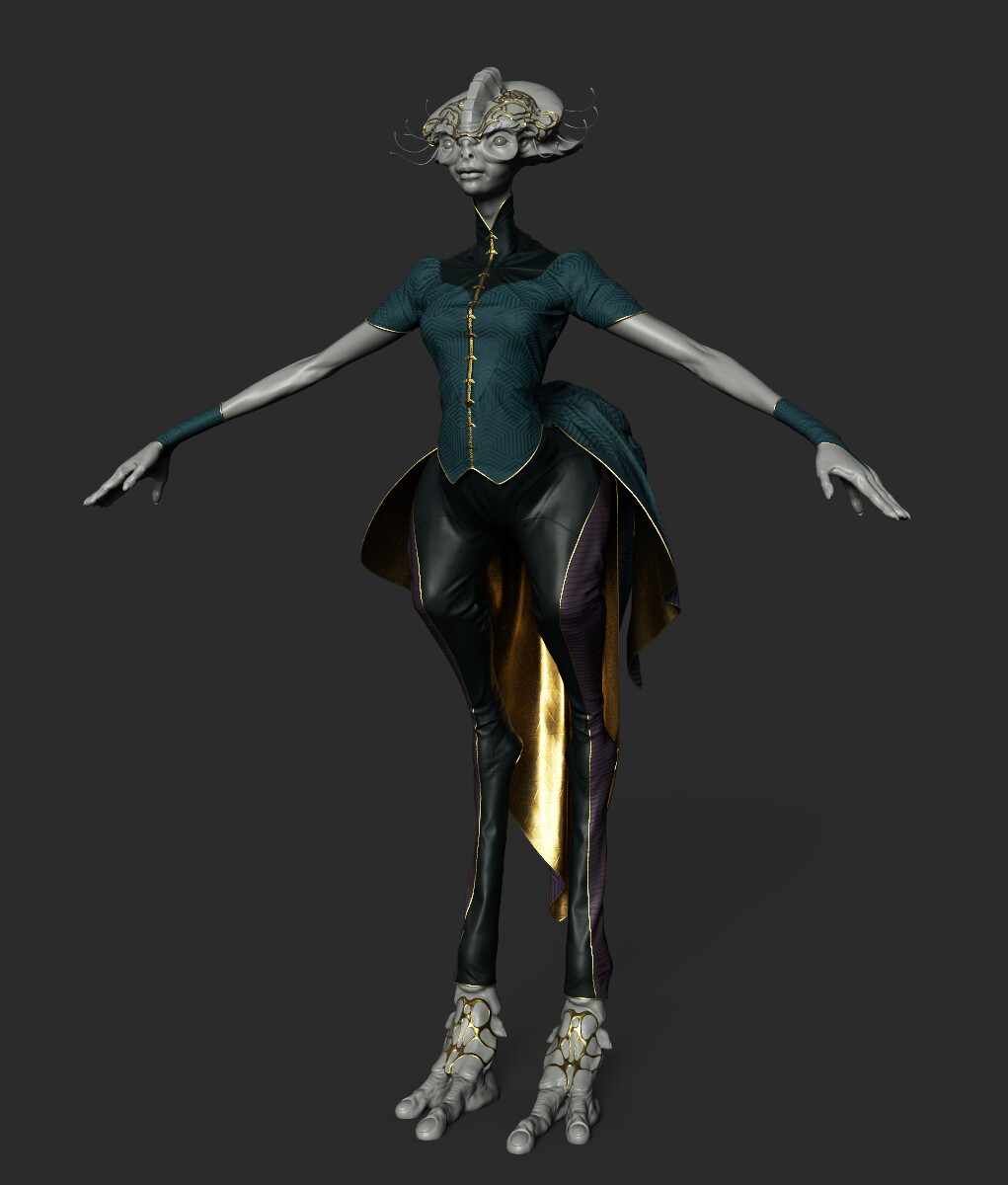 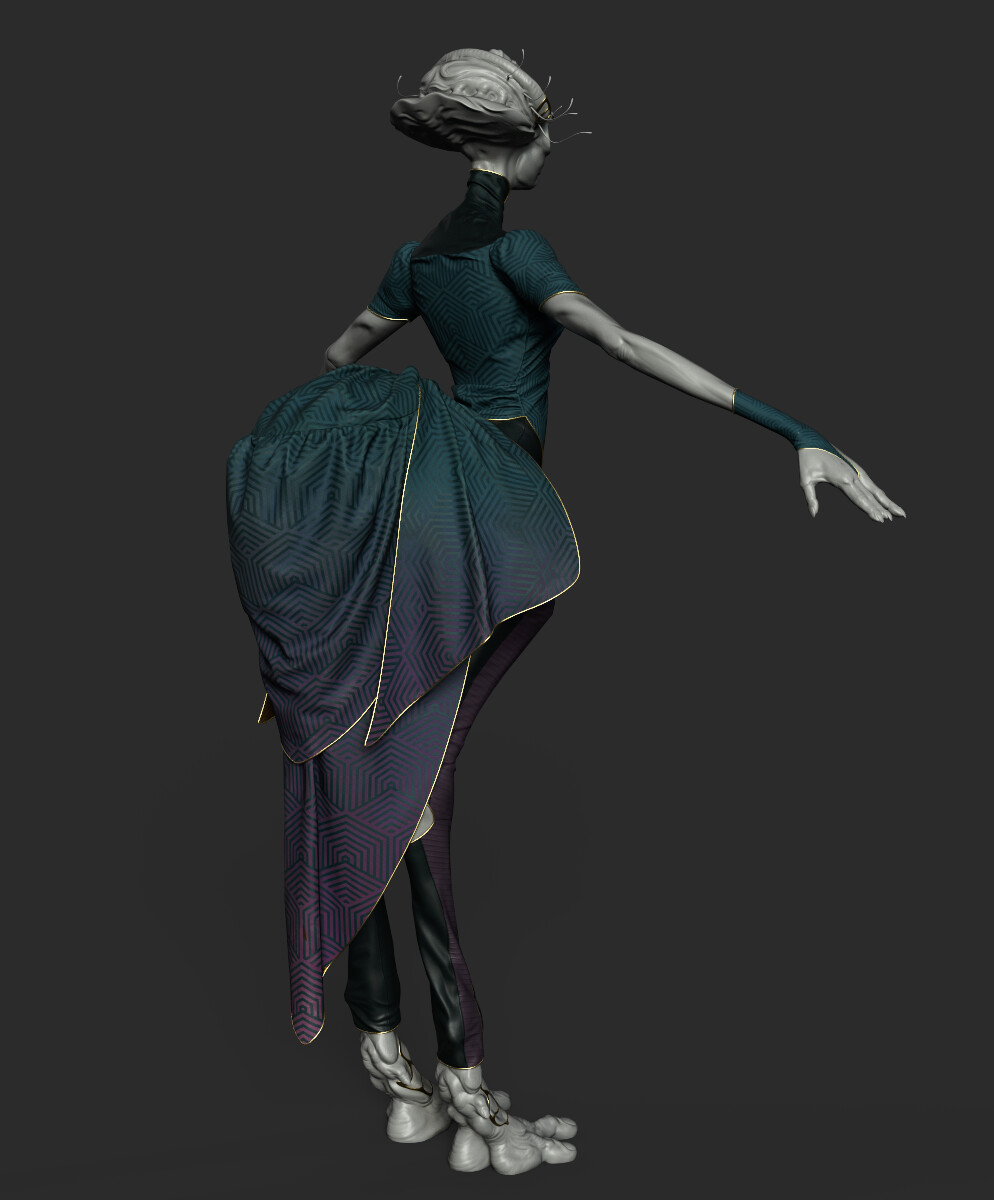 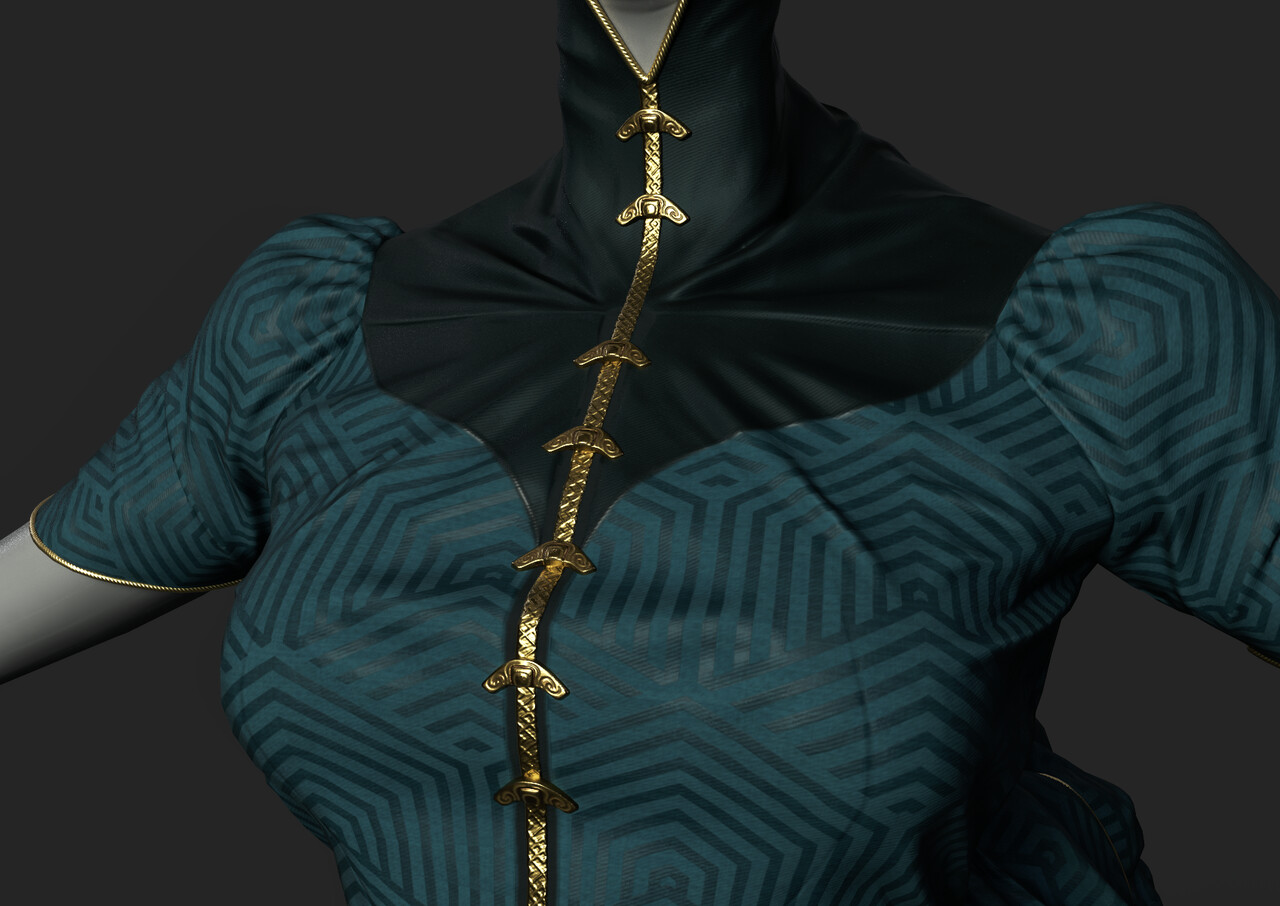 Hey ho,
currently I'm working on the retopo of my character, I looking for unnesecarry polygons and build shapes that follows the folds better to support the normal map on top but doesn't look to flat from the 3/4 view.

The head is a tricky one, because I'm working with a mouth open head for the bake, I have to use a mouth closed blendshape which means I have to prepare later a retopo head with the same vertex Ids and topoligy to be able to project the pose.

Anyway, here a a few screen grabs from the retopo version 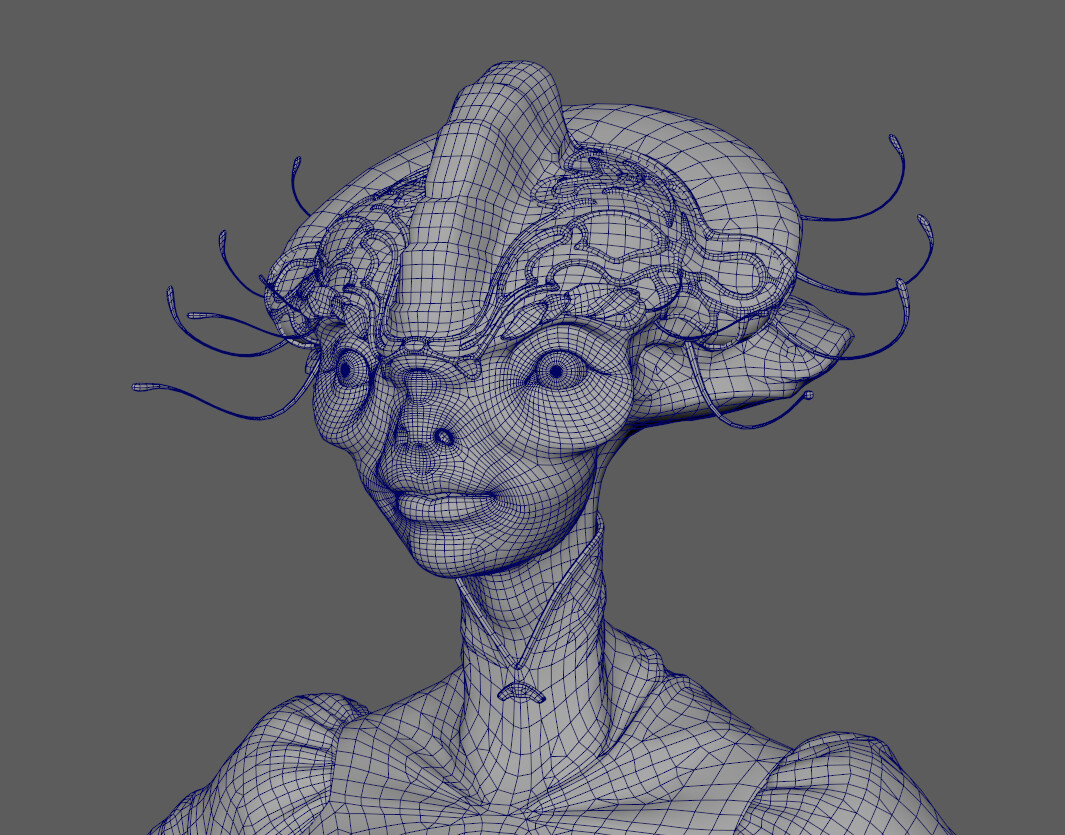 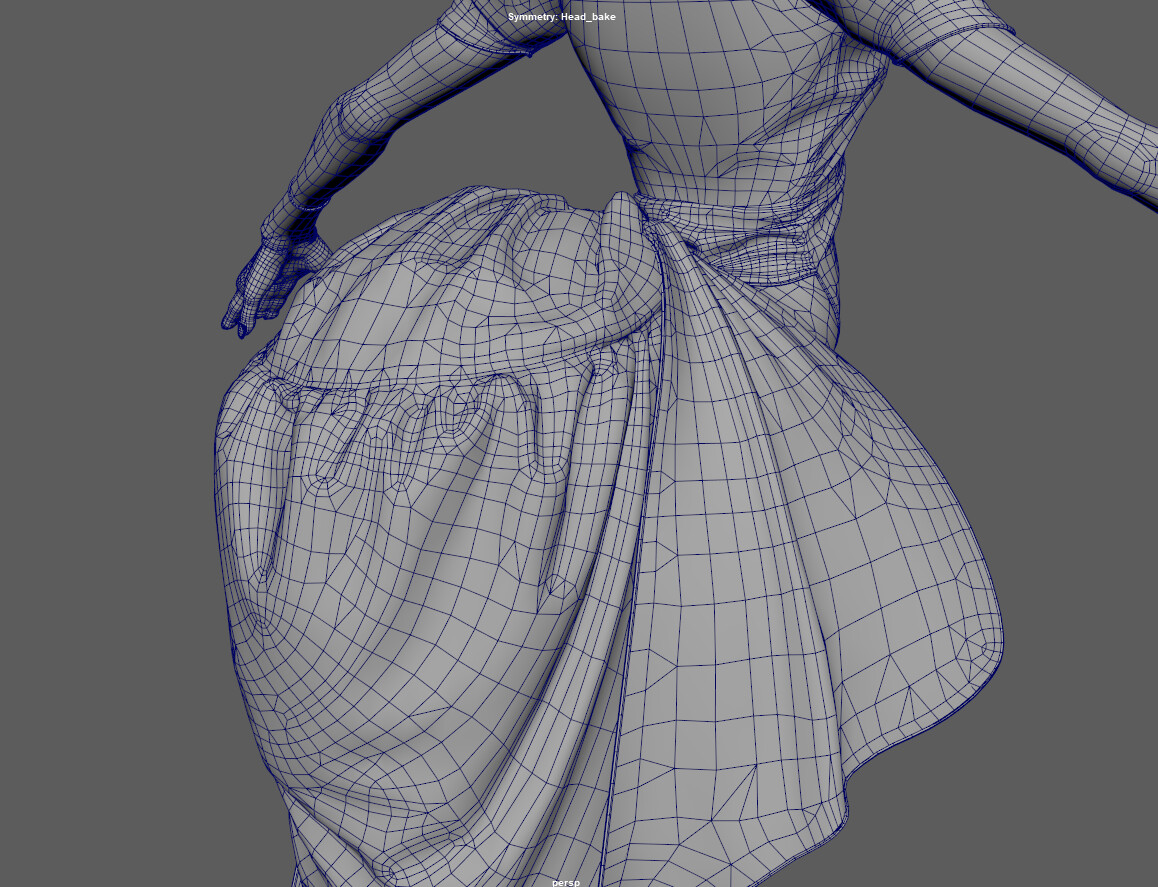 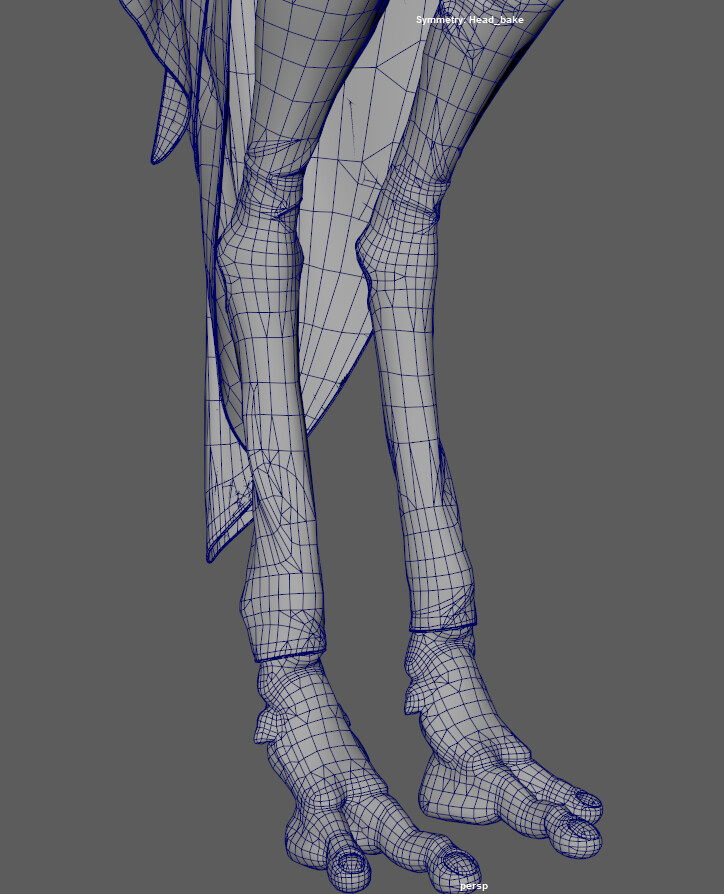 During the retopo of every single piece I made test bakes to see if the current shapes works without baking and normal map issues.
Here are images of my latest test head bake. 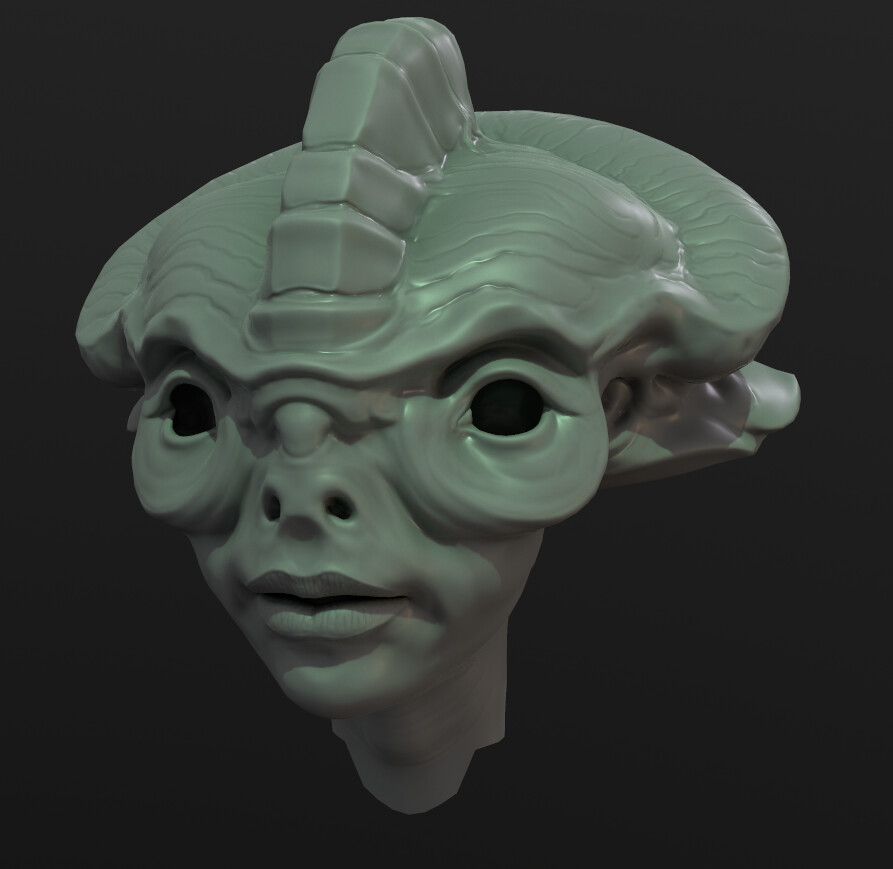 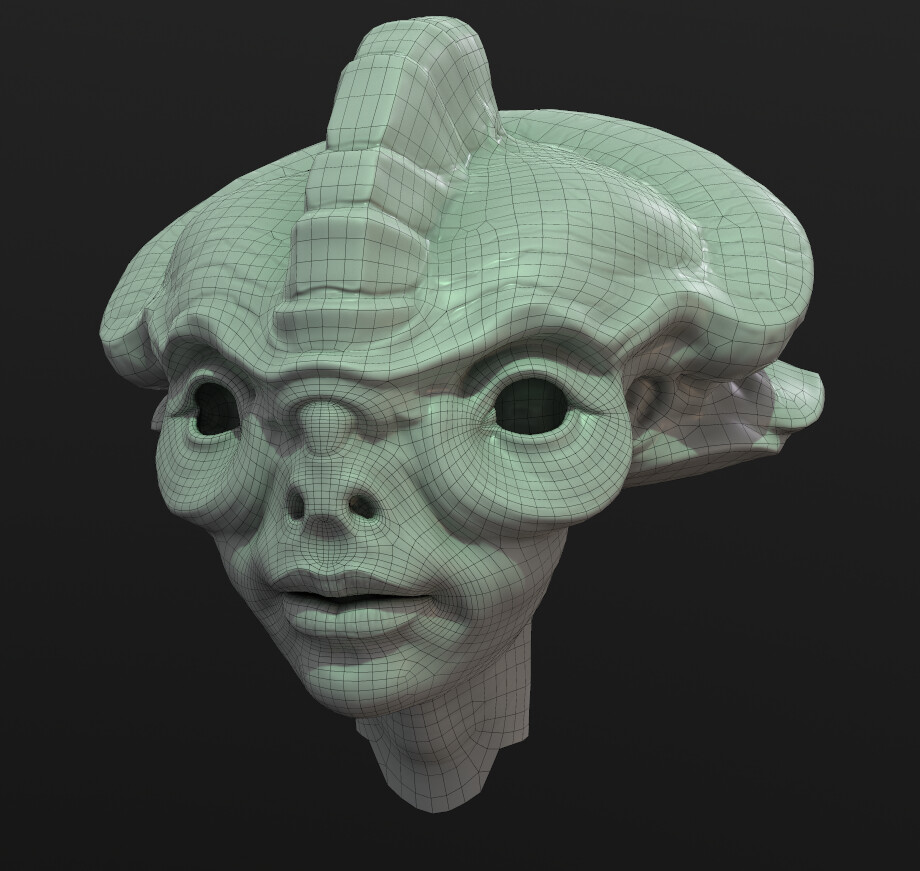 Hi,
it's time for an update!

I polished a few areas of the cloth pieces and worked slightly on the feet design. Therefore I added dew claw toes to have the same shape language as I already using for her hands.

I think the Highpoly is now done, next step will be the lowpoly and unwrapping magic. 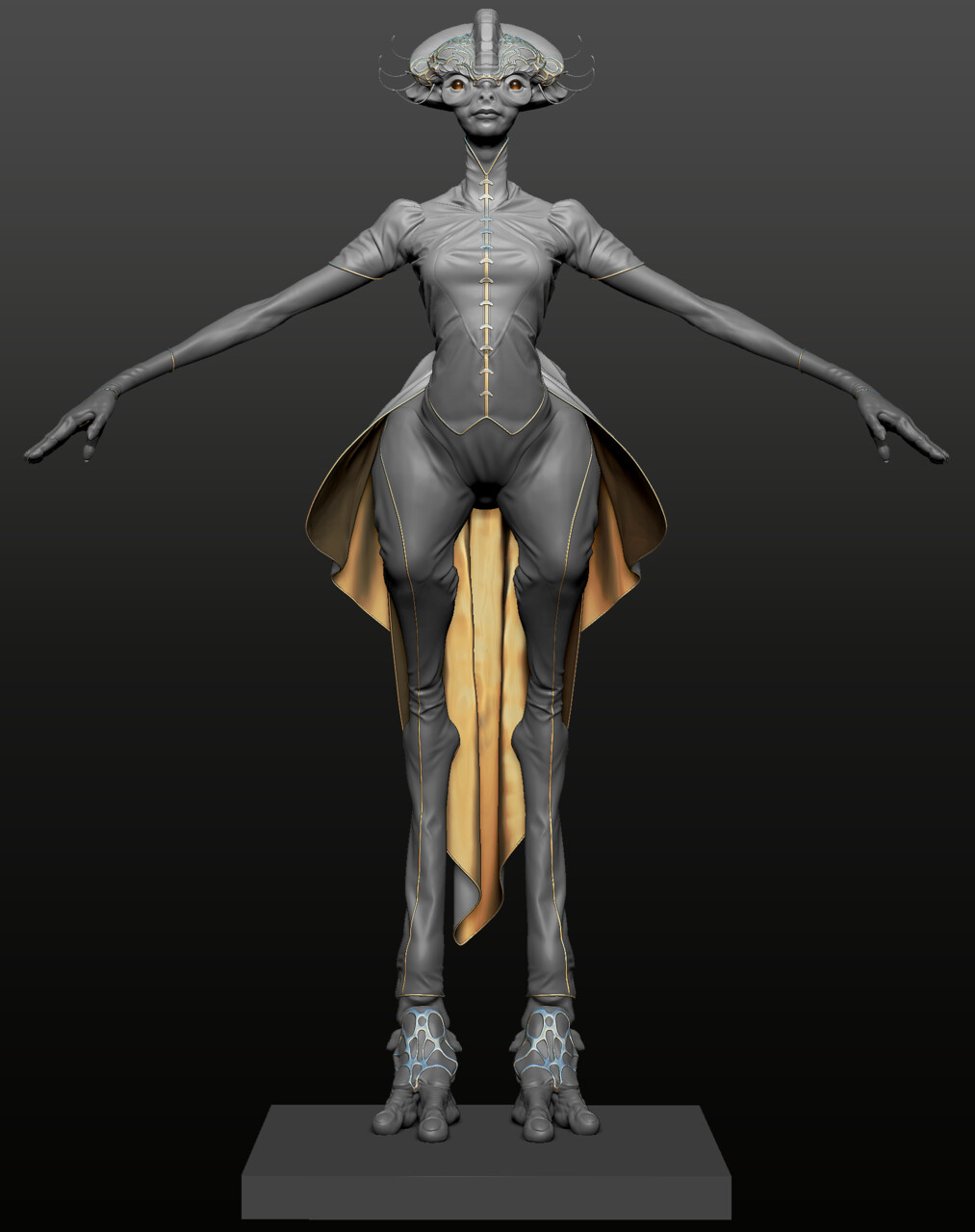 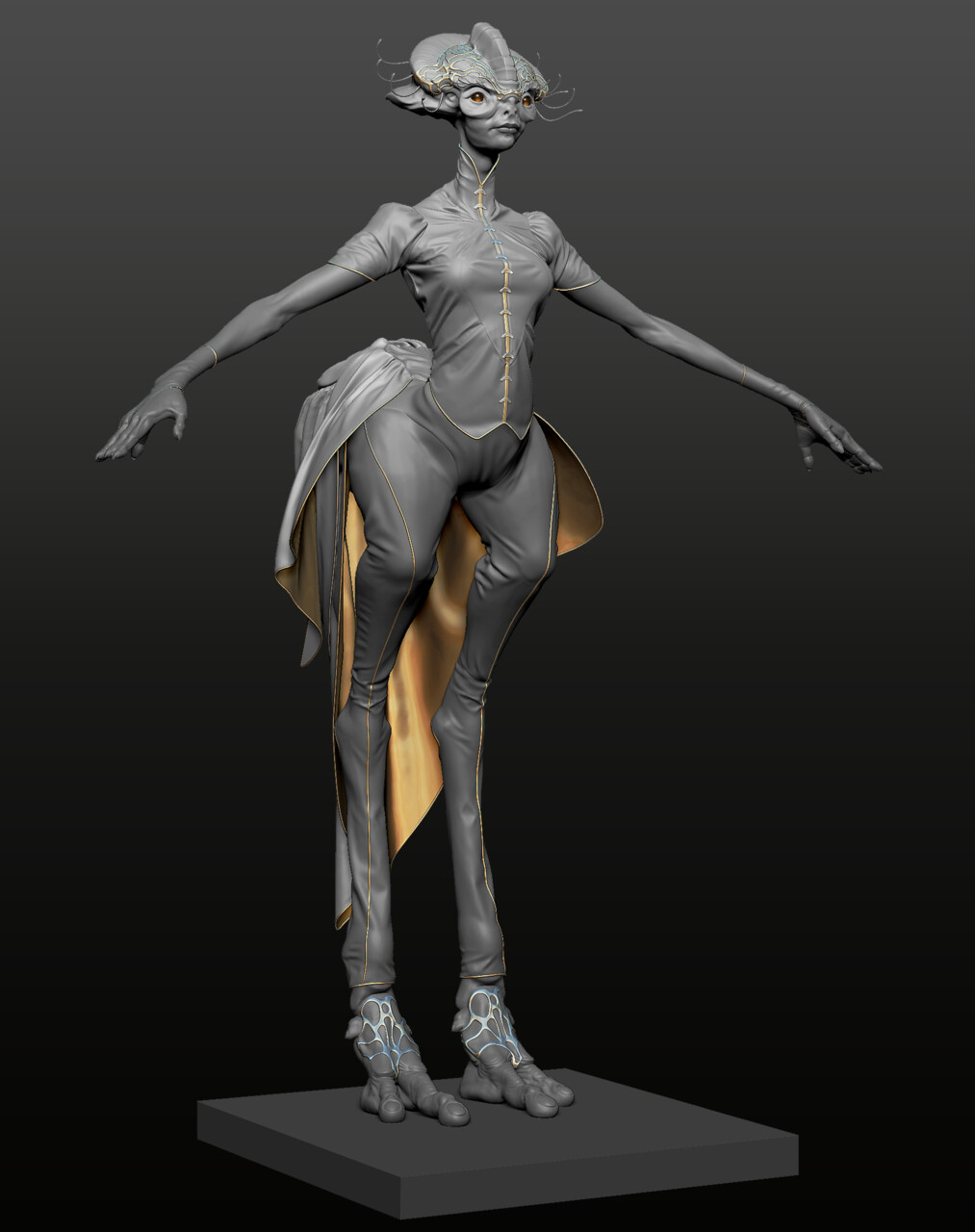 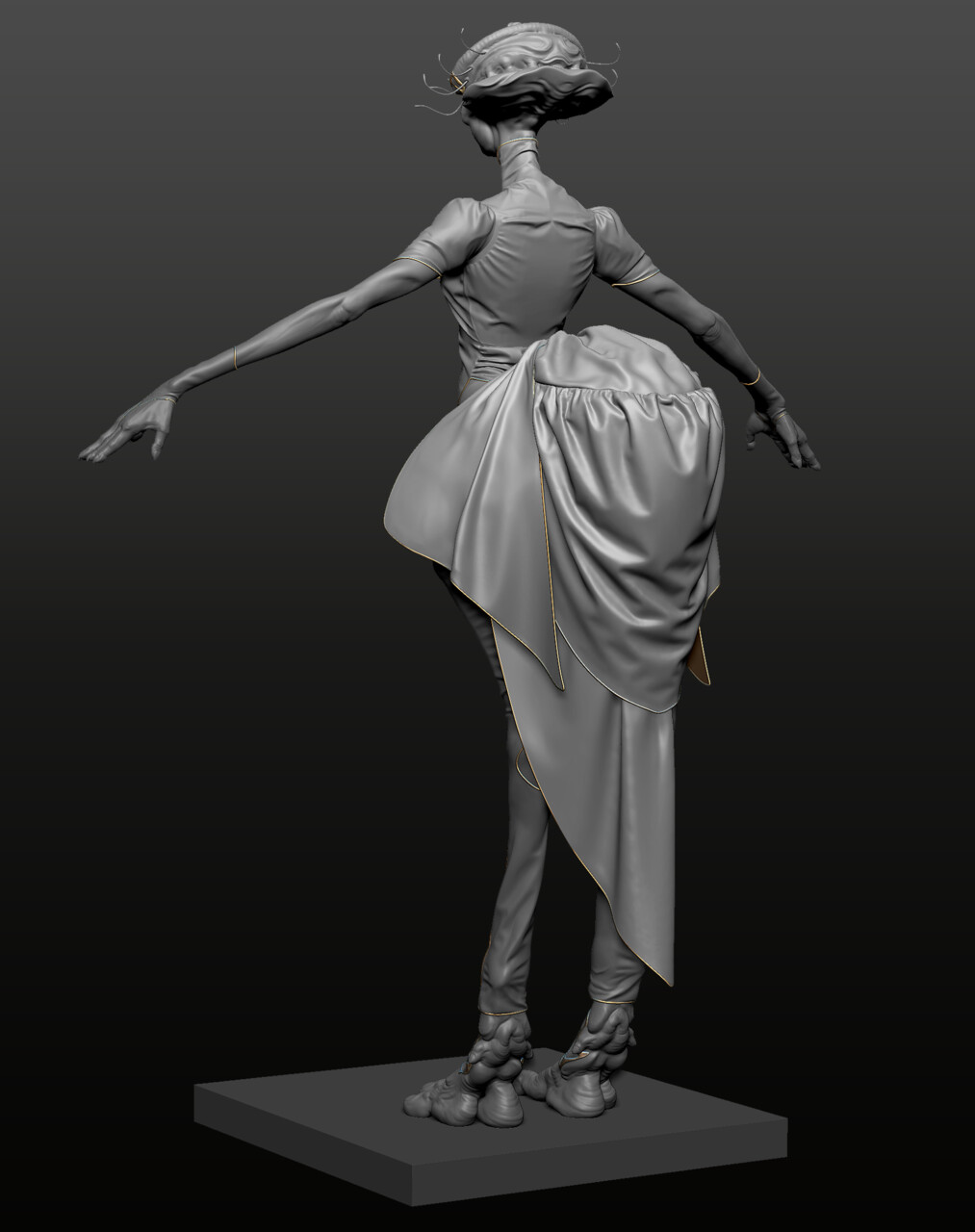 current status of my project ...
I'm working on the refinement of the clothes and skin parts. I Added the biggest volumes and wrinkles for the skin because I want this as part of my later bake process. The pores and smaller skin details will be made within substance painter, because I then I have a better controll of the detail dimensions and can tweak faster compared to a pure sculpted mesh.

What I really enjoyed was the sculpting of her lips, her face has now more depth and looks natural.

For the baking and texturing process, I duplicated her head and made an slightly open mouth position too.
Now I can bake without cleaning normal maps in small areas like mouth corner and also I was able to reshape her lipline better than I would be able to do with a closed mouth.

Here are a few detail pictures : 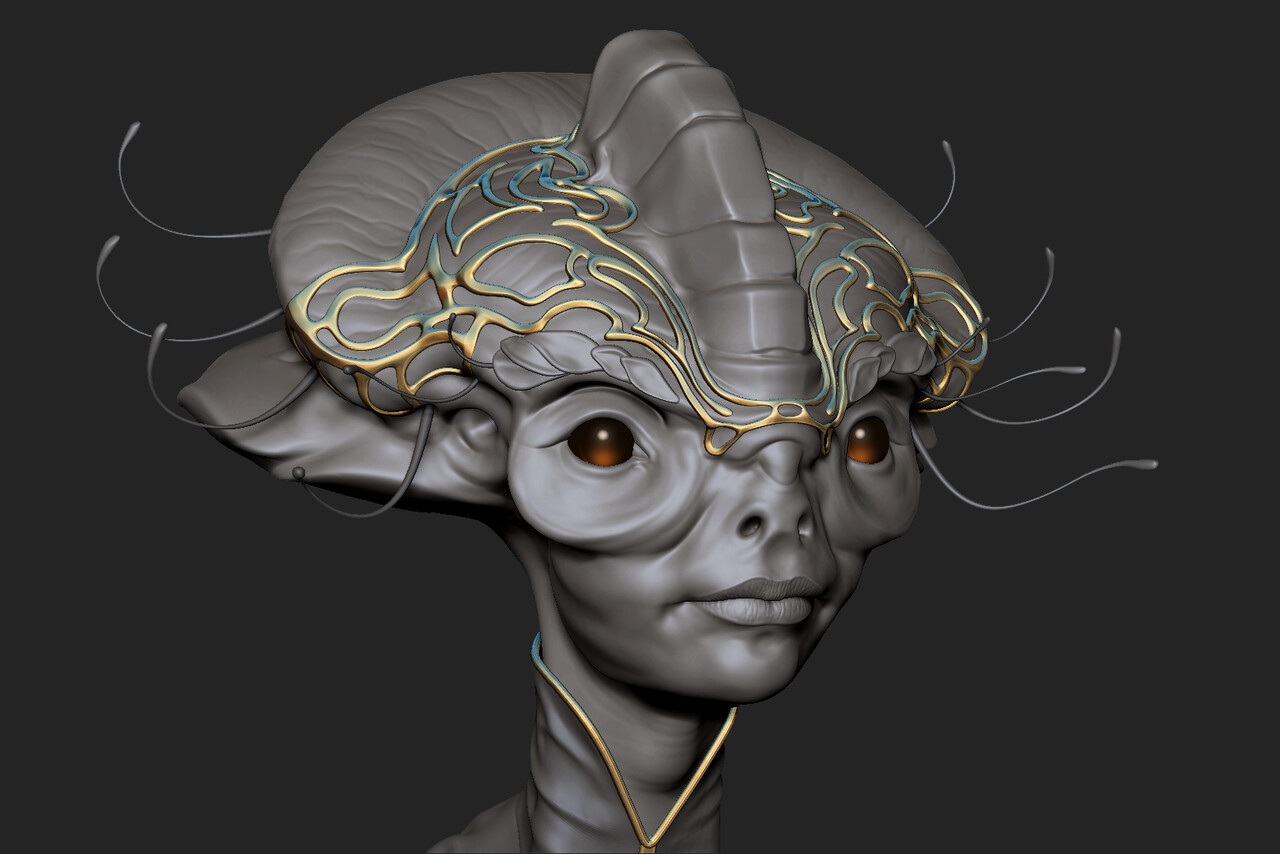 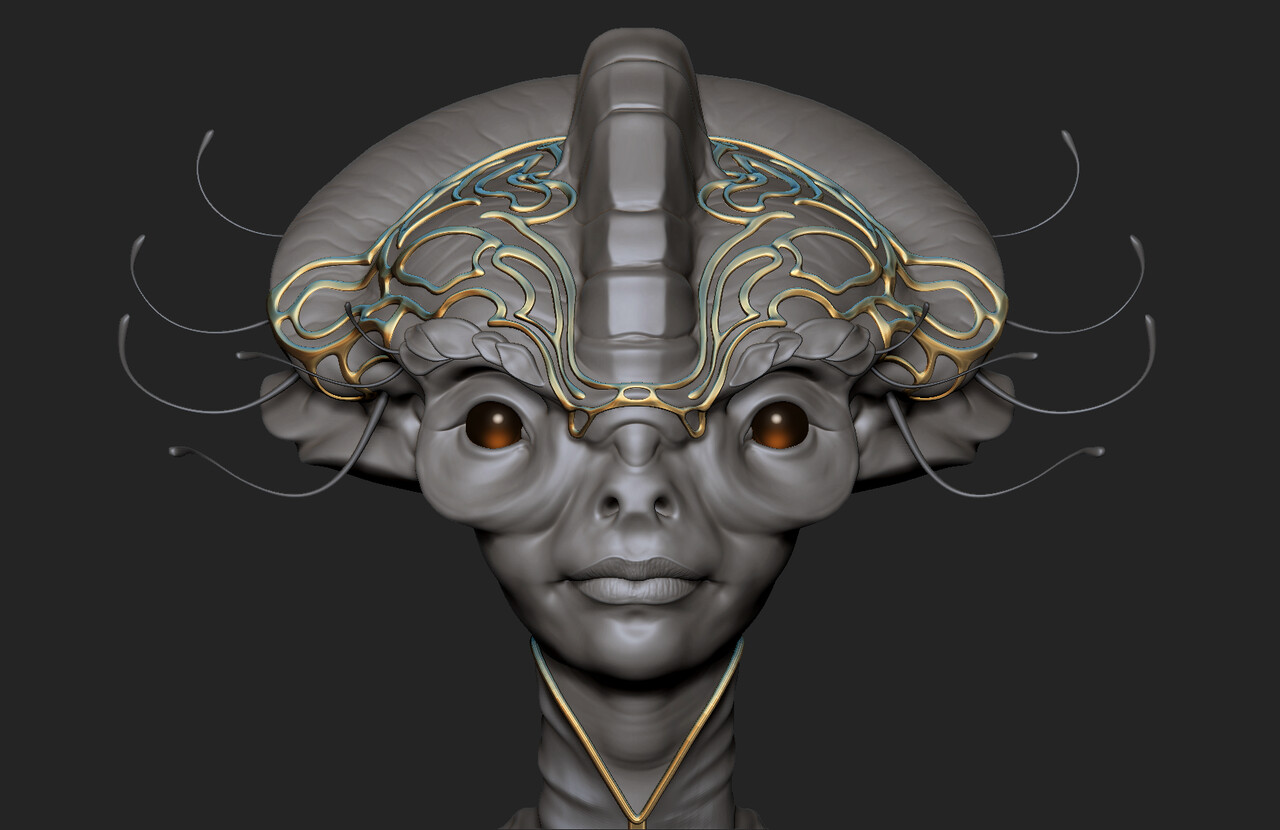 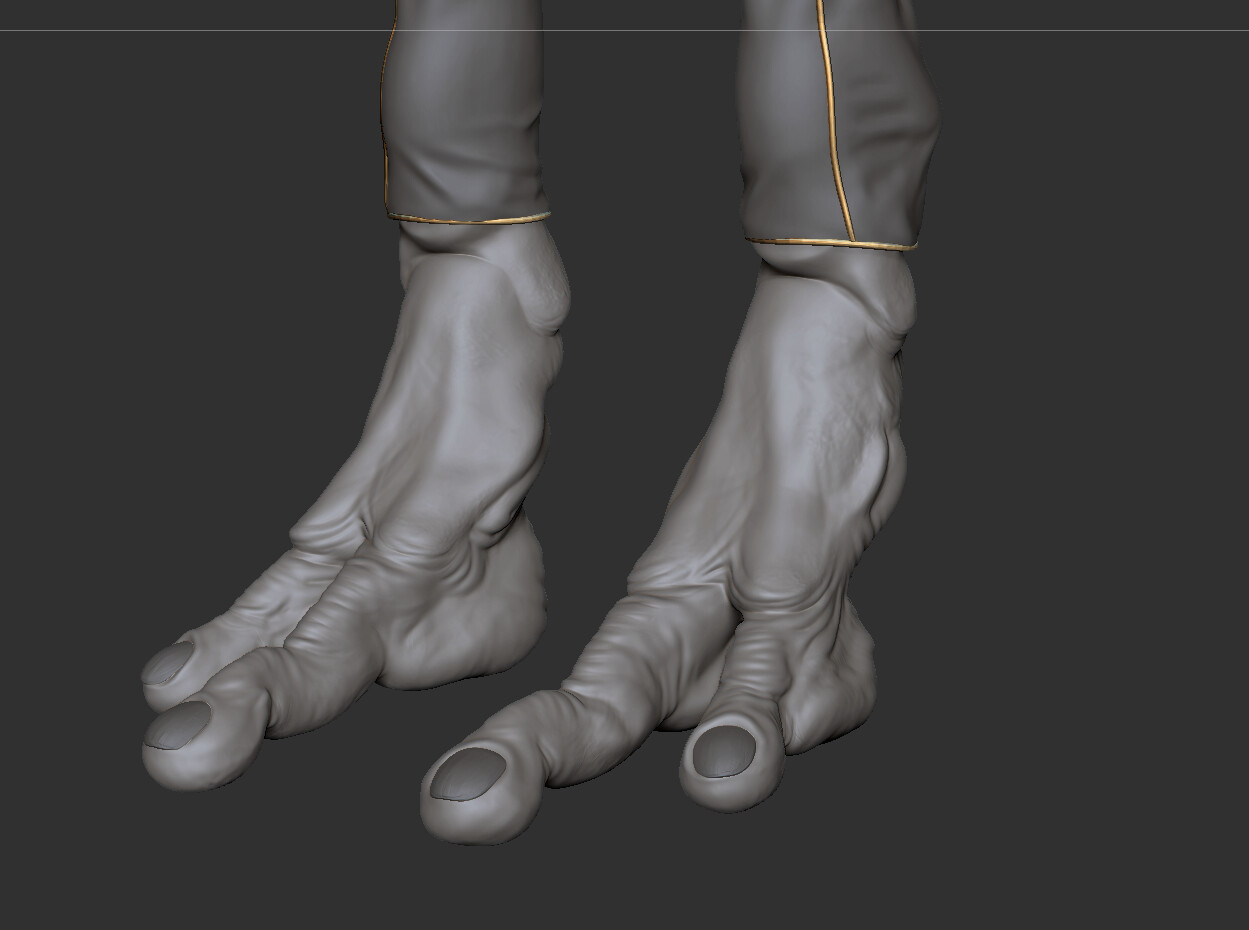 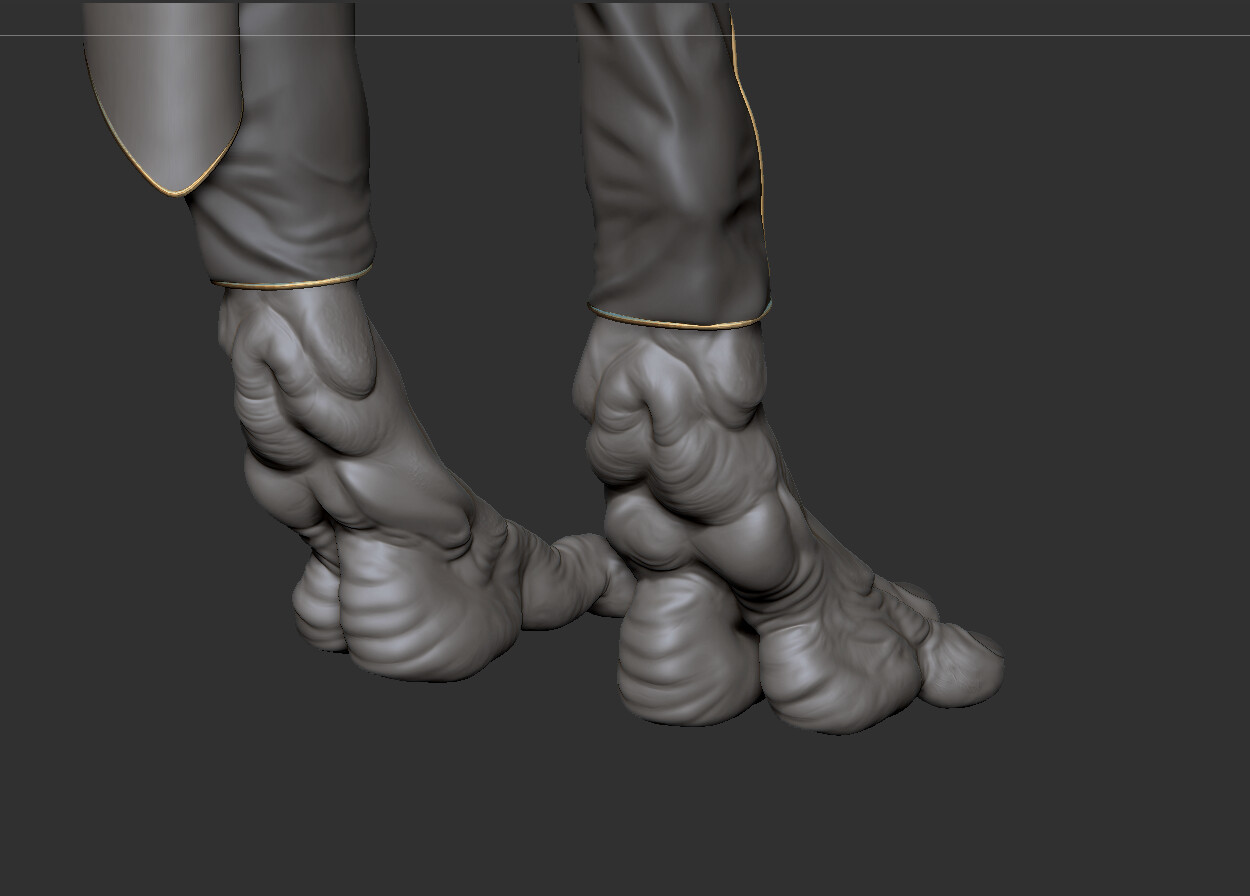 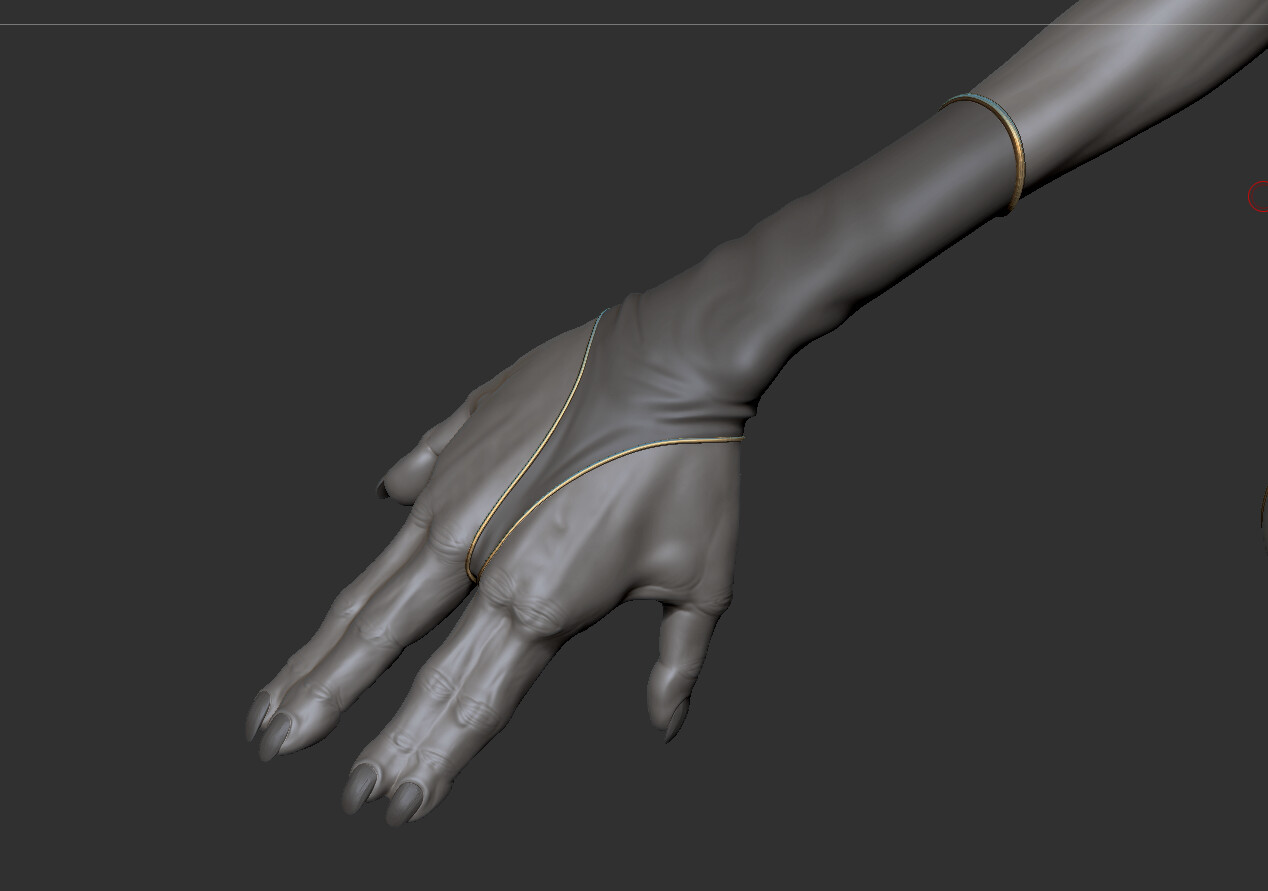 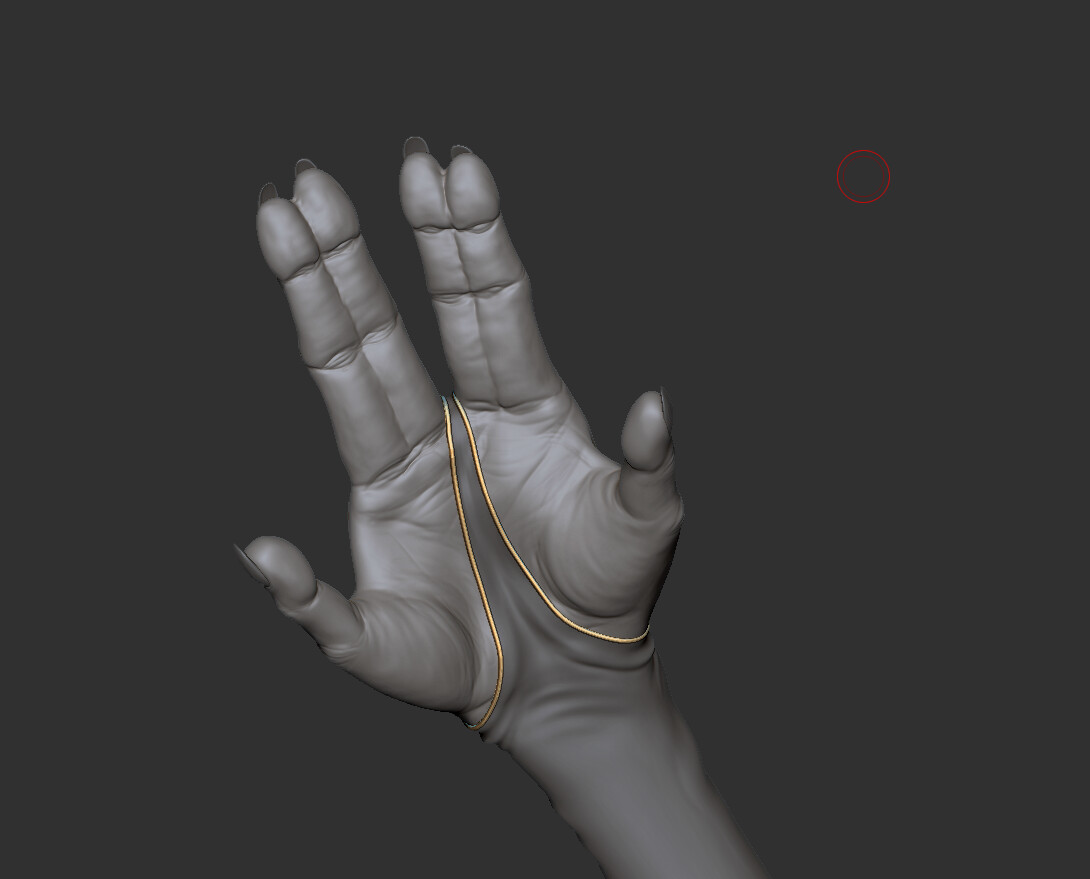 I found the time to make the piping geo for the cloth borders. I had slightly reshape a few cloth pieces to fit perfectly with the piping geo.
The jacket detail in the middle and the piping line on the leg will be just baked into the normal map, that will reduce my headaches in terms of bending issues later.


So here is an oven fresh turnaround

Furthermore I deleted two eyebrow tentacles, because it was too busy on the front area. Instead I made eyebrow horn pieces to frame the eye sockets. 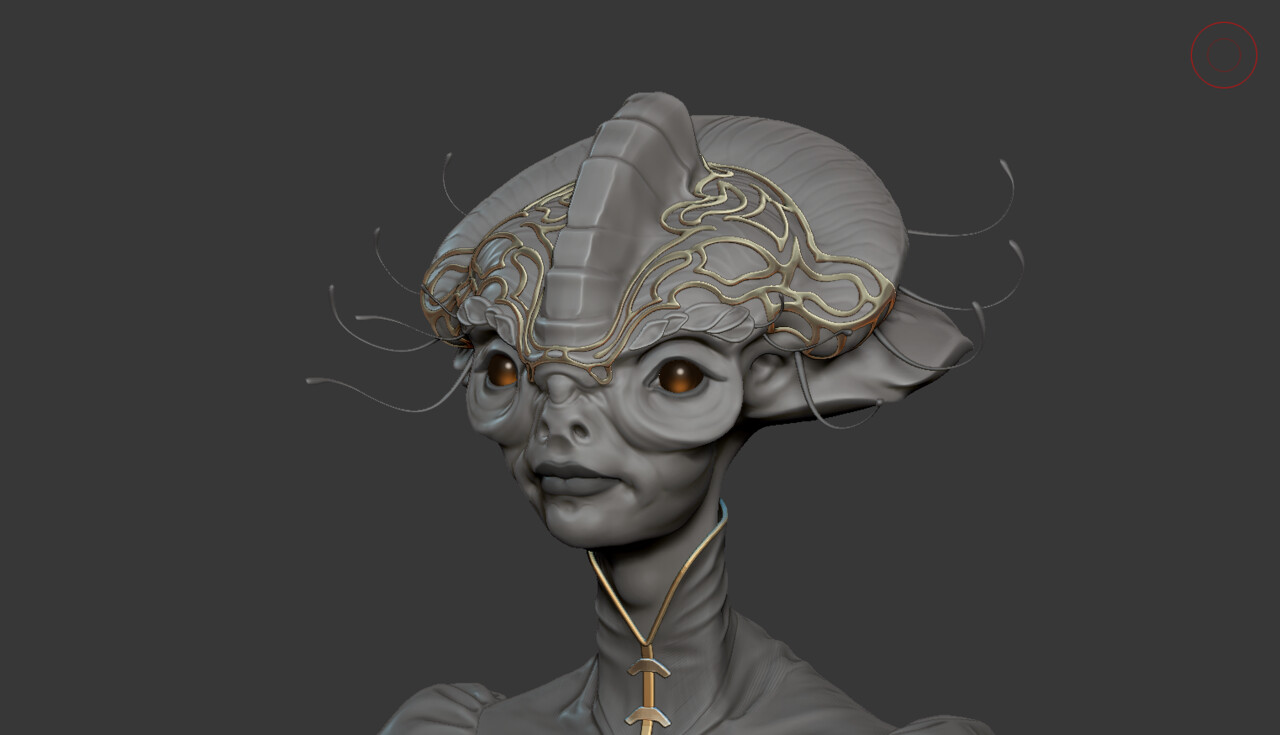 And I went to the feet because it was still in the base shape status and now I made a more organic structure with big wrinkles to mimic movement and create an organic feeling. 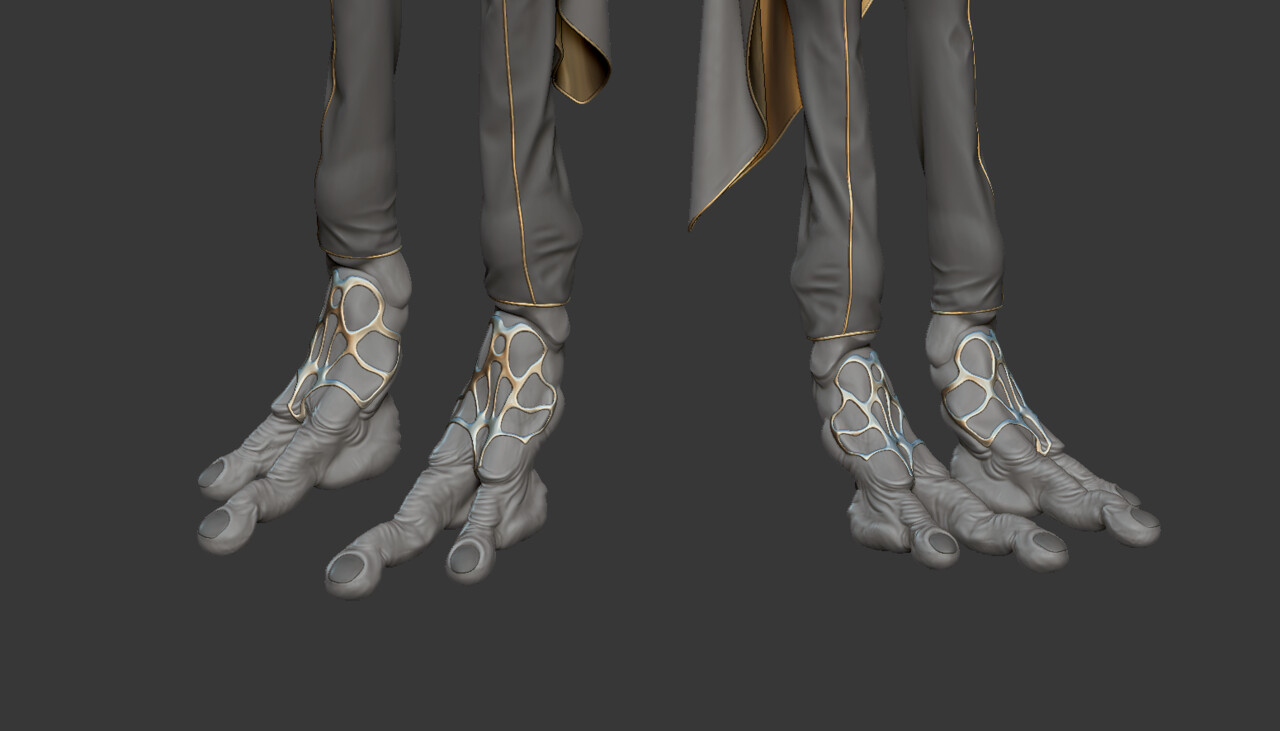 I worked further on my project, adding head/feet jewellery details and buttons for the jacket, giving her finger and toenails oh and I made the tentacle antennas for her head.

Also I made a few more devlook renderings and I think I'm going with an golden jacket lining material to break up the overall bluish tone and creating a more interesting contrast. For the rendering I also painted the piping to create a better visual guide for the further steps. 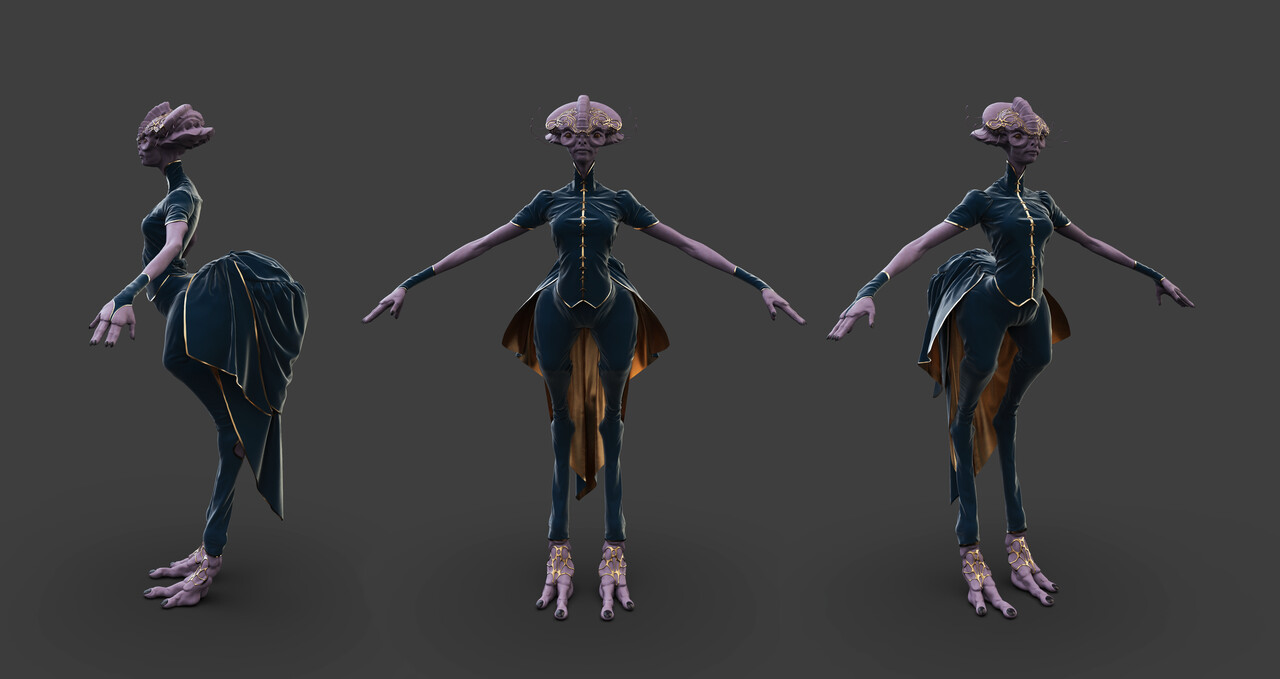 I made a few more concepts for cloth and jewelery stuff. Also I blocked out the eyebrow/ tentacle shapes 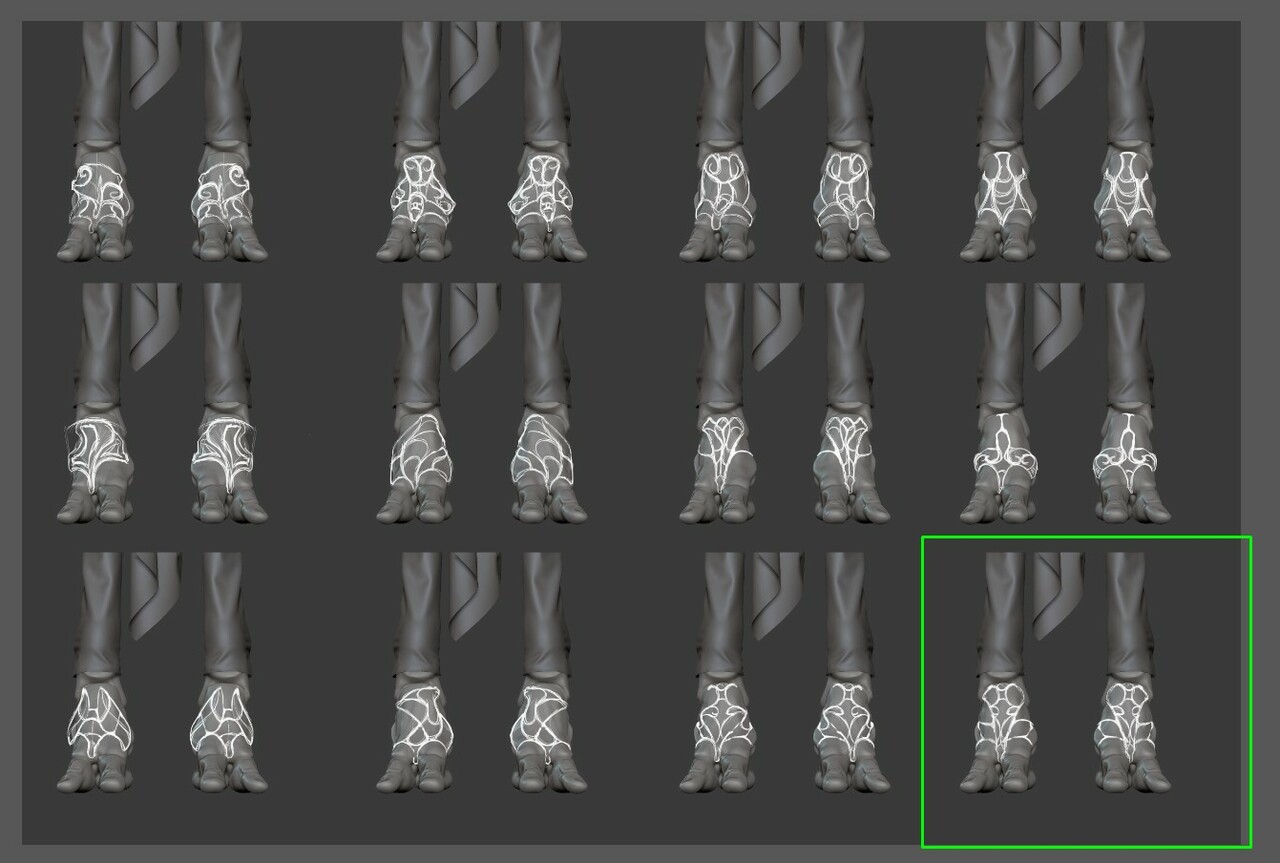 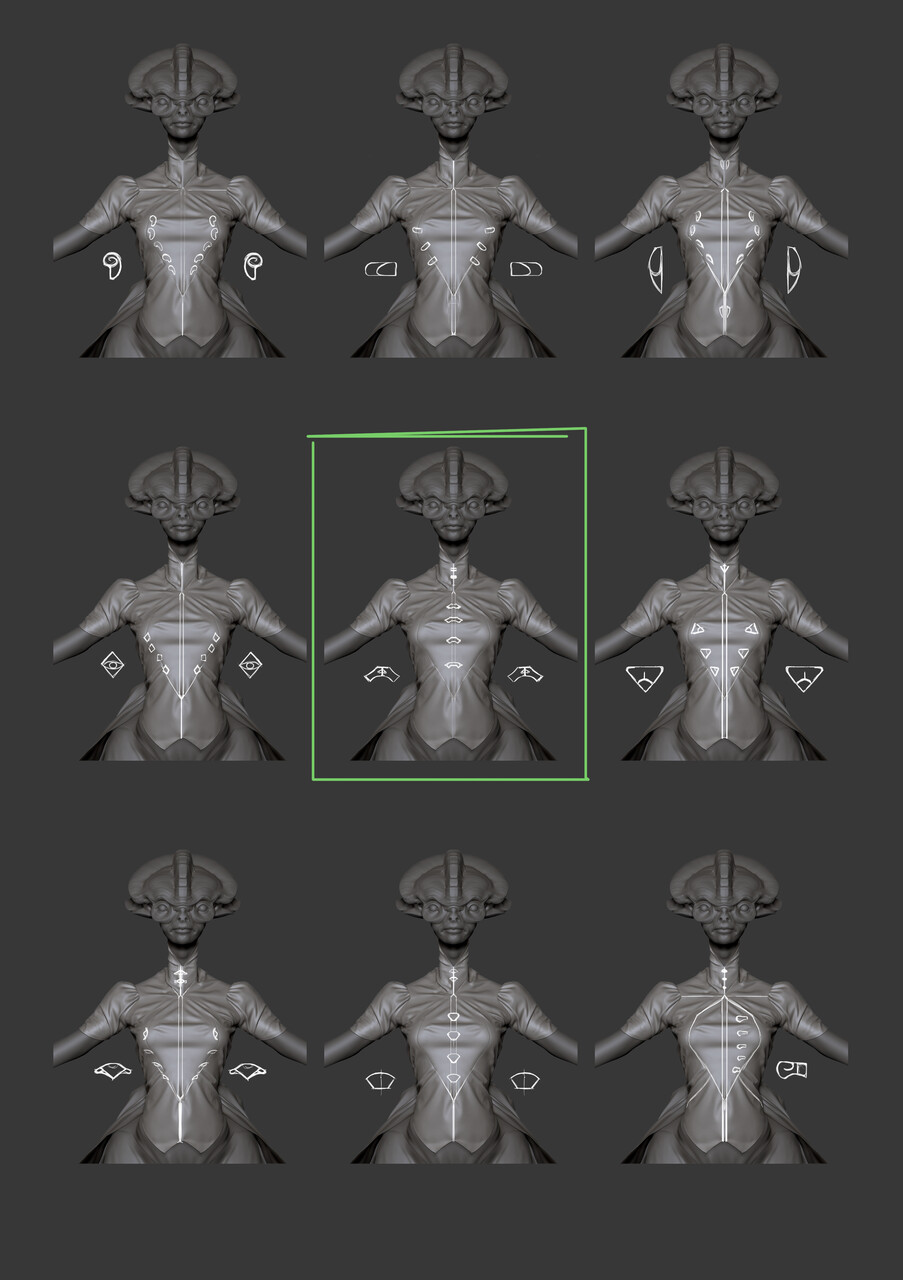